But the spice’s complex, alluring flavor really does play well in cocktails. And that’s why we’re so enamored of this saffron liqueur from Chicago-based Apologue Spirited Liqueurs. The vivid flavor of saffron shines through, but it’s supported by a host of other spices, including turmeric and cardamom. Its rich hue recalls the yellow-golden color that the spice itself can impart.

Here are three cocktails that make the most of this multifaceted liqueur, from bright and juicy to dark and brooding.

Why does this sophisticated liqueur shine in a drink that’s become a punchline? The memorably named Harvey Wallbanger combines vodka, OJ, and the herbal liqueur Galliano. While most versions served in the drink’s heyday were painfully sweet, it’s a far better drink if you tweak the proportions. And when we swap out the Galliano, it turns out that the saffron’s liqueur’s warm, earthy character is a great counterpart to fresh orange juice. Just trust us on this one.

Instructions: In a cocktail shaker with ice, combine an ounce of saffron liqueur, an ounce of vodka, two ounces of fresh orange juice, and half an ounce honey syrup—that’s just equal parts honey and hot water, stirred until dissolved. Shake until well-chilled, then strain into a rocks glass with fresh ice. Top with an ounce of club soda and stir briefly. Garnish with a large orange wedge.

The rich, earthy flavors of this liqueur are a great match for the warm spice of ginger. So here, we’re pairing them in a toddy of sorts: a strong lemon-ginger tea, saffron liqueur, and a good glug of bourbon to stiffen it up. Don’t skimp on the garnish, the most essential aspect of any self-respecting toddy.

Instructions: Make a strong lemon-ginger tea by pouring 4 ounces of boiling water over one lemon-ginger teabag, and let steep for five minutes. Remove teabag. Add ¼ ounce of honey (1.5 teaspoons), an ounce of bourbon, and an ounce of saffron liqueur, and a dash of Angostura bitters. Stir briefly to dissolve honey. Garnish with a lemon peel, a cinnamon stick, and a big slice of fresh ginger. 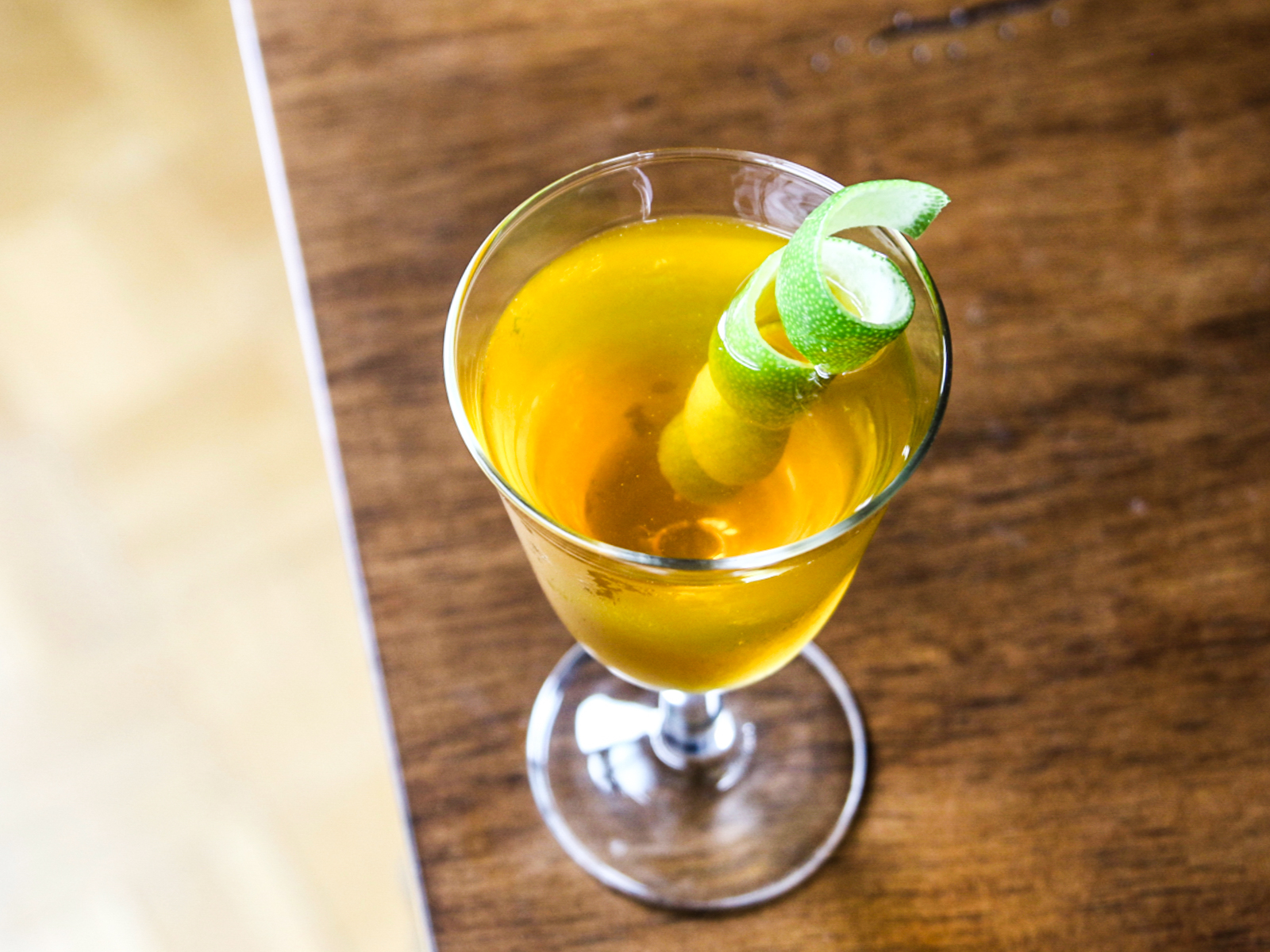 Great reposado tequila has the depth and warmth of an aged spirit while retaining the peppery vibrance of agave. And it’s tequila’s earthy, slightly vegetal side that pairs so well with this saffron liqueur. Add a little agave syrup and a lime twist, and you’ve got a sophisticated sipper that comes together much more easily than its complexity suggests.

Instructions: In a mixing glass with ice, combine two ounces of reposado tequila and an ounce of saffron liqueur. Add ¼ ounce of agave syrup (agave nectar cut 1:1 with hot water, and stirred until it dissolves). Stir until very well-chilled, then strain into a chilled cocktail glass. Garnish with a lime peel, twisted over the surface of the drink to spritz its citrus oils over the cocktail.